Putting My Marriage Out To Tender

Putting my marriage out to tender

As a key stake-holder
End-user, consumer and customer
I’ll provide a clear service description
For streamlined procedures
Using built-in performance incentives
And a level of profit-sharing
With payment strictly by results

Here is our weekly round-up of events from D-Town:
1.      Once again D-Town residents have been caught totally by surprise by the advent of the season often referred to as “Winter”.  It has come as a complete shock that it can rain a bit in February, as well as being a bit cold.  Big coats, gloves and scarves are highly recommended, together with hats and properly-soled shoes.  Umbrellas may also be required.  A public information campaign will be mounted shortly warning citizens that seasons known as “Spring” and “Summer” are predicted to follow in the next few months.  Big coats may not be needed, particularly in August.  Who knew?

2.      And in other news the DBC (Devizes Broadcasting Corporation) has come under attack from the Lord Mayor and the Town Council.  The DBC has been accused of being “institutionally biased” towards rural issues.  There is now a threat that the DBC Licence Fee could come to an end, to be replaced by a subscription service on the Netflix model.  The council is also said to be looking at opening a video rental store on the Blockbuster model, a financial services outlet on the Pawnbroker model, and a food-bank on the Workhouse model.

Posted by barredfrombromham at 09:49 No comments:

Email ThisBlogThis!Share to TwitterShare to FacebookShare to Pinterest
Labels: Bulletin

The Woman In The Red Car

The Woman In The Red Car

Clearing Out The Freezer

Clearing Out The Freezer

I decided it needed some help to get going
And set about it with a big hair-drier
This’ll soon melt the ice, I thought
This’ll get it off to a flier

But nothing seemed to do much good
The perma-frost was still inches thick
So I started hacking it with various tools
A knife, a saw, a hatchet and a bloody big stick

Gradually I gained access to the interior
To the shelves and the mysterious drawers
To the frozen packages held therein
And I rushed to discover them without pause
Well, it was like opening a treasure chest
Or going on a magical mystery tour
To dig out the long-lost containers
And wonder what any of them were for

The labels had all faded or melted away
So no clues as to what was therein
No idea when they’d been squirreled away
It was hard to know where to begin.

It’s amazing how frozen food all looks the same
When it’s covered in crystals of ice
One lot of gloop looks like another
Was it something disgusting or nice?

Did I really freeze two spoonfuls of fried rice?
Are these pork sausages or somebody’s fingers?
There’s curry stains on the side of the boxes
It’s yellow and the smell of it lingers.

The hands, the feet and the arms
Were well wrapped up as a disguise
Was that somebody’s nose and their ears?
Was that a skull with still-frozen eyes?

A leg and piece of somebody’s back
A few ribs, a couple of kidneys and a liver
I only barely remember cutting the guy up
The blood must have flowed like a river

Still, I can’t be bothering with that now
There’s no way of getting around it
I’ll just do what everyone else does
And stuff it all back in where I found it!

What else you need to know:

Posted by barredfrombromham at 09:03 No comments:

Email ThisBlogThis!Share to TwitterShare to FacebookShare to Pinterest
Labels: Recipes

I’ve never really understood you
Or known what you might want
You just sit there year after year, implacably the same
Never growing or shrinking
Your pale green flesh all sheeny shiny
Bristling with hairs and spikes
A defensive exterior
Always showing to the world

But do you have a tender side to your prickly nature?
Is there a more succulent inner plant
That is cool and moist, sweet and gentle
Wet and watery
That you reveal to your very closest friends?

I confess I don’t know how to love you
When you just stare straight back at me
No signal of your feelings, nor flower of happiness
You give me so little response
That I often wonder
What it is it you’re waiting for

To me, you seem so undemanding
As if you do not even need me
I cannot comprehend your desires
Sitting in your arid pot and saucer
Happy in your desert dryness
Thriving on my neglect

A Doll’s House
Observe the finest detail
Of this perfect, tiny, tidy showcase
Everything in its rightful place
Sitting silently
Waiting for someone larger than life itself
To call, to come and play
To bring activity and energy
Into this lifeless land

See how carefully the maker has toiled
How exactly his model replicates reality
With its inter-connected rooms
Its attics, basements and cellars
Doors and floors, halls and walls
A side that opens to the outside
Revealing to wider inspection
That anyone may peer inside
With a genial God-like presence
And watch the goings-on
Of this toy-land territory
Made in matchless miniature

How beautiful, how ideal it all appears
And yet how quiet, dusty and dormant
And how empty this small community
Undisturbed by cries of living children
A shining showpiece
That is a house and yet not a home

Don't worry - Barred From Bromham is here to help you. Whatever you need - from a recipe, an amusing poem, an incoherent rant - you'll find a selection of these on this site. Derived from my personal philosophy of life, together with an unparalleled understanding of human nature drawn from a fifty-year career as a complete idiot. People are often amazed at the power of my words. People are also often amazed that I even bother to write them down. But, there you go - it's all free, so you can't complain. However, if you do use or quote anything from this site, please acknowledge the copyright. Nil carborundum desperandum. 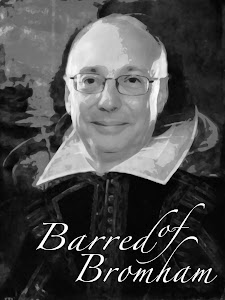 barredfrombromham
Tired of life as an international jet-setter and industrial magnate, I retired "pour cultiver mon jardin" (Voltaire - look it up) and to gather the strength to "reculer pour mieux sauter" (no, I don't know who wrote that either). That led to the writing, particularly short stories and poetry. The resulting verse could not have been worse, or so they told me. After reading my poetry in public, I was barred from any repeat performances in my local village. Thus Barred From Bromham was born. And the rest, as they say, is geography.